At Kinchakuda(Hidaka-shi,Saitama), Cluster Amaryllis(曼珠沙華/彼岸花) are blooming like a red carpet in Mid September.
Let’s go to another world where you can go from Tokyo Ikebukuro Station in less than an hour.

1.Approximately 5 million pieces of Cluster Amaryllis! It’s as if a red carpet

2.You can enjoy Local Food

3.You can also see Cosmos in the Kinchakuda Field

5.”Koma Jinjya Shrine” which worshiped the leaders of the Korai people who came from the Korean Peninsula

1.Approximately 5 million pieces of Cluster Amaryllis! It’s as if a red carpet 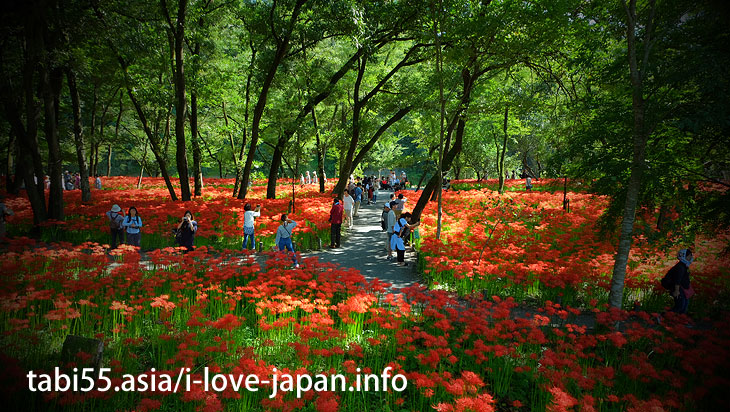 The best time to see the Cluster Amaryllis, the weather is good.
Visitors took pictures and stroll while talking.
It seems that they were enjoying. 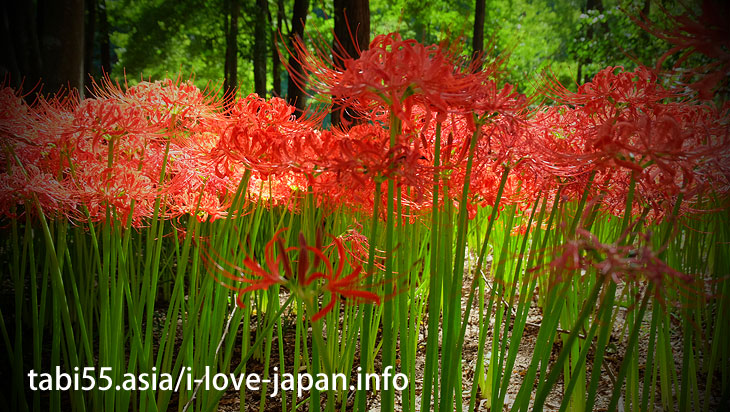 Not only “flower” but also “stem” is beautiful. 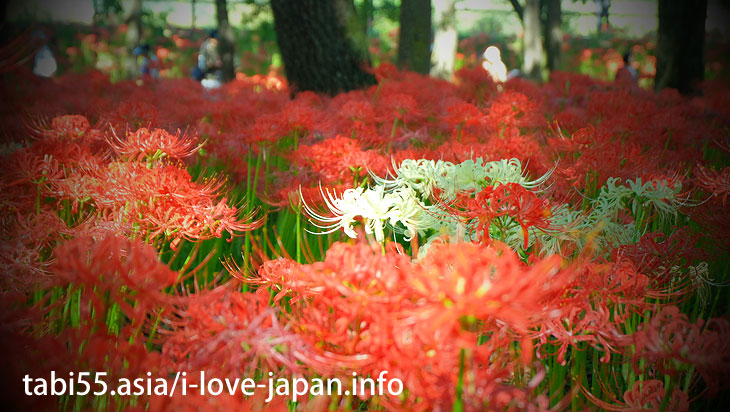 There is not only red but also white as well. 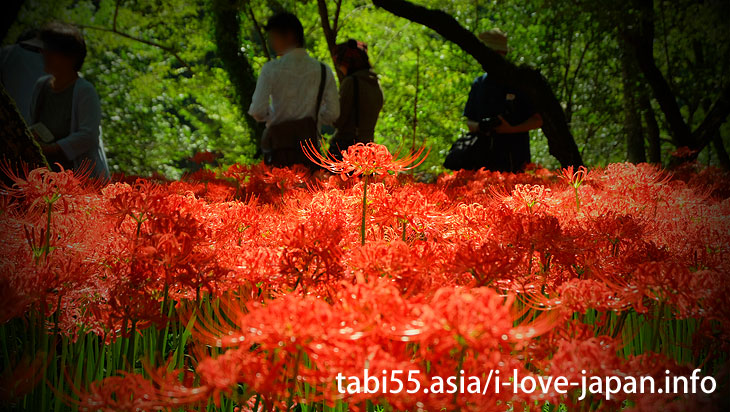 Please do not miss the “red carpet” limited in the middle of September – late.

2.You can enjoy Local Food 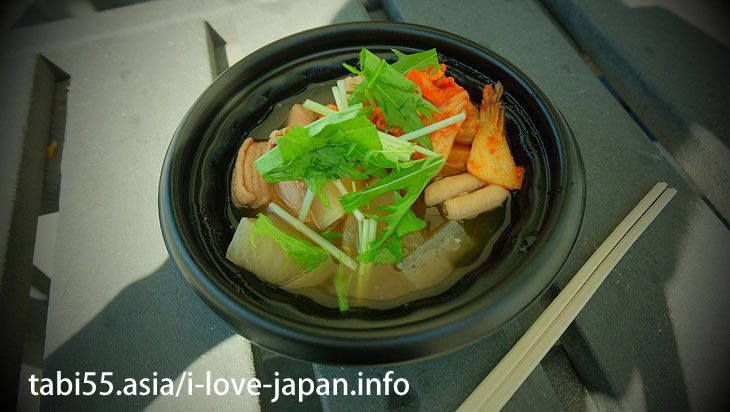 During the blooming season of the Cluster Amaryllis, the “Festival” is being held.
You can get local specialty foods and souvenirs.
I ate the special product of Hidaka “Koma Nabe”.

3.You can also see Cosmos in the Kinchakuda Field 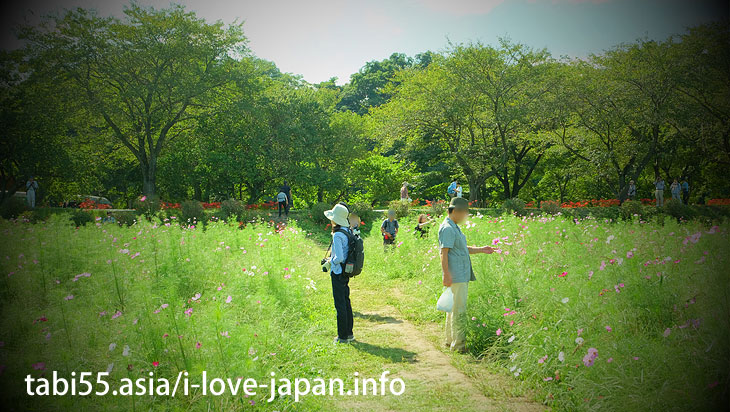 Although it may be lacking in glossiness like Cluster Amaryllis,”Cosmos” is blooming in Kinchakuda field. 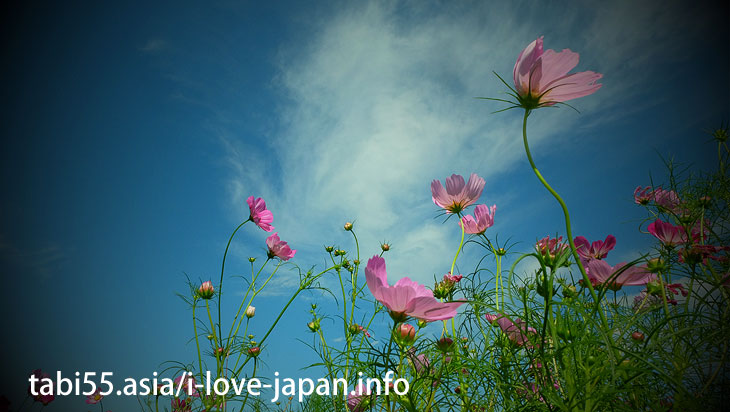 Cosmos is being tossed by the wind… 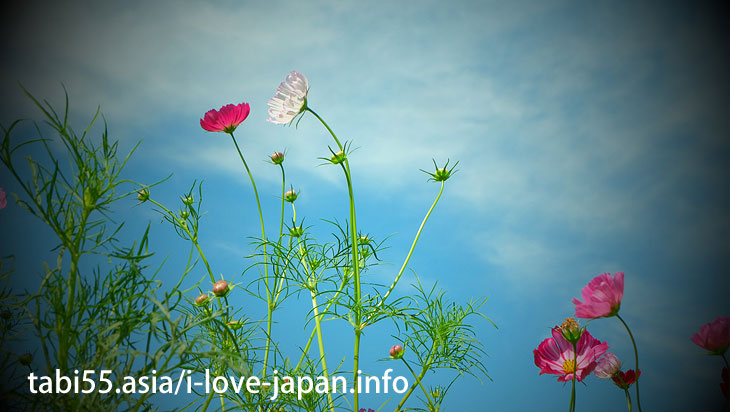 As long as life, it was in full bloom.

5.Built as a temple of the Korai people who moved to Japan “Senten-in” 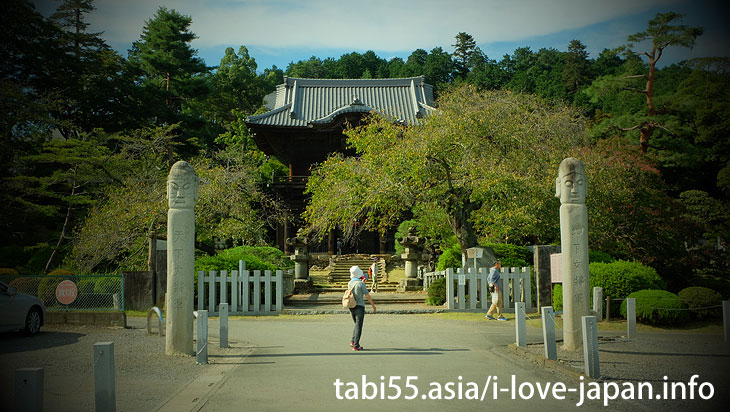 The pillar standing in front of the temple is called “shogun-hyou”, and it is a boundary mark for amulets found in villages in North Korea and South Korea. 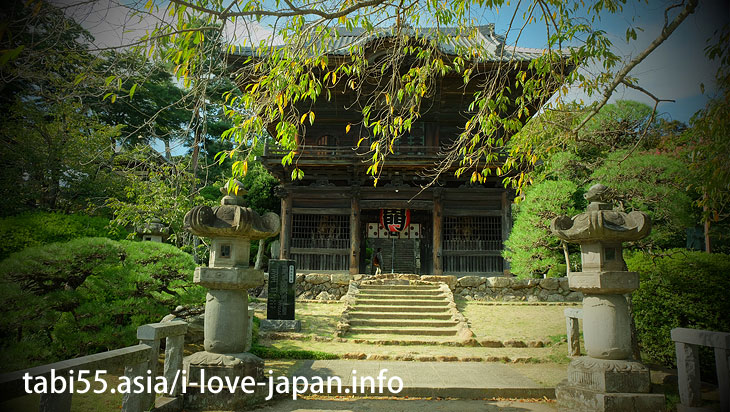 It is said that it was completed after spending six years, and it is a heavy mountain gate with total roof construction of tile roofing. 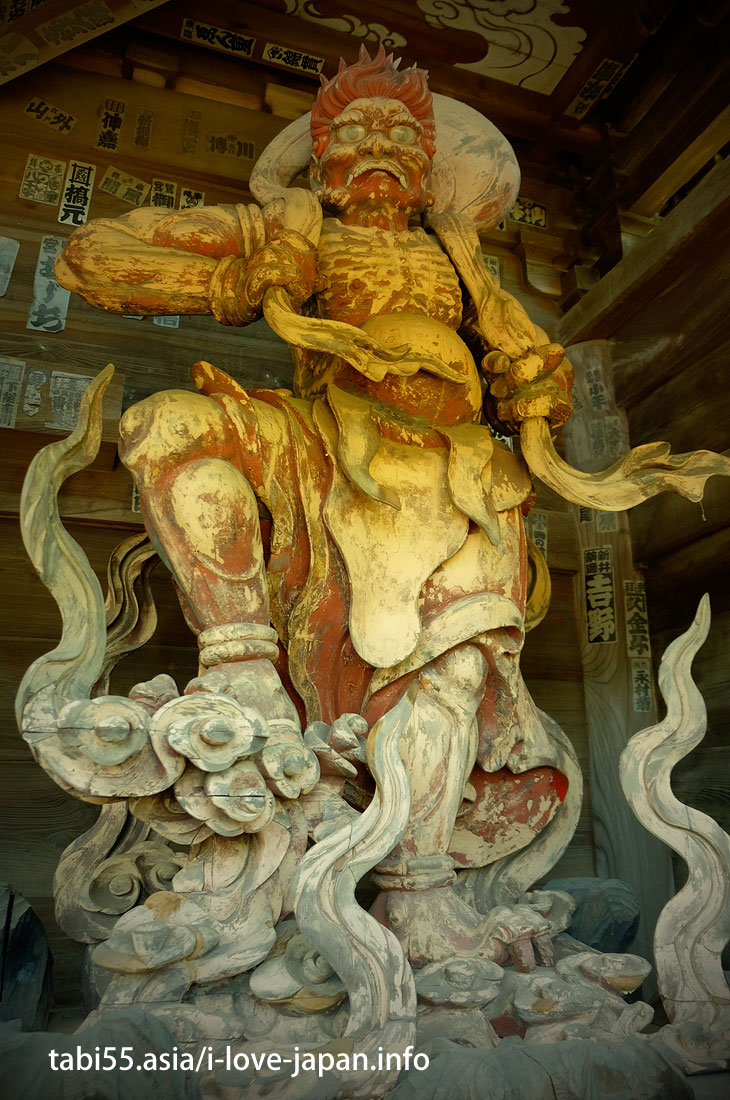 Mr. Fujin (photo above), Mr. Thunder who defend the gate were superb.

5.”Koma Jinjya Shrine” which worshiped the leaders of the Korai people who came from the Korean Peninsula 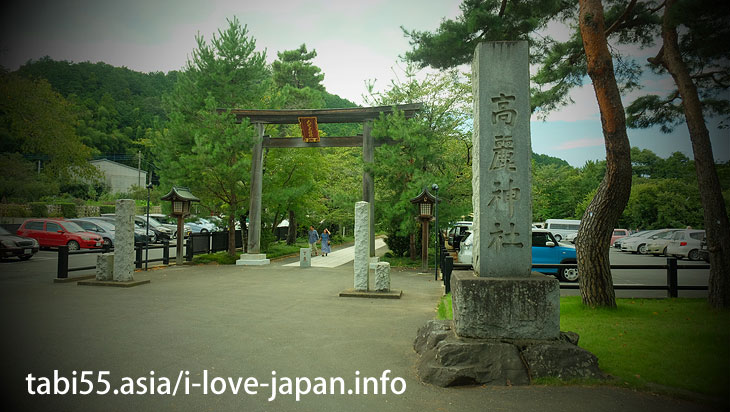 In 716, Komanokoshiki jyakkou(高麗王若光) was appointed chief of Koma-gun newly established in Musashi country.
He conveyed the continental culture to here where he was an undiscovered wilderness.
It seems that he got together with 1799 people of Goryeo (Goguryeo) who moved from various parts.

After his death, the korai-people remembered his virtues.
It is said that the Koma Shrine was established. 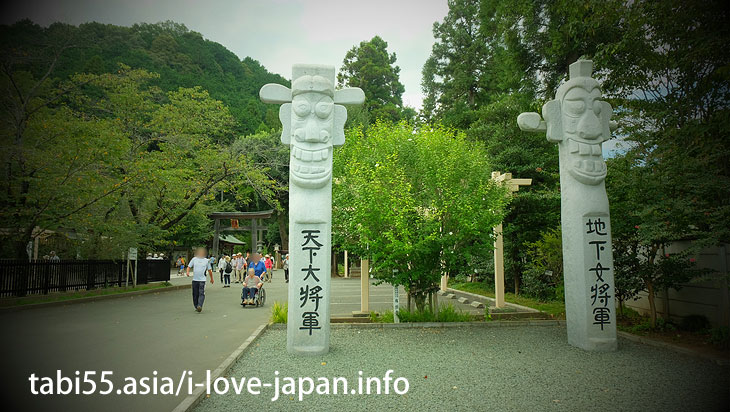 There was Shougun hyou with a humorous face. 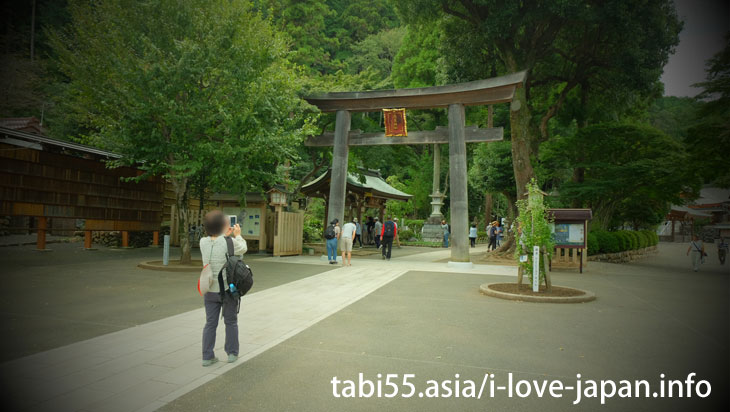 The precincts are no different from general shrines. 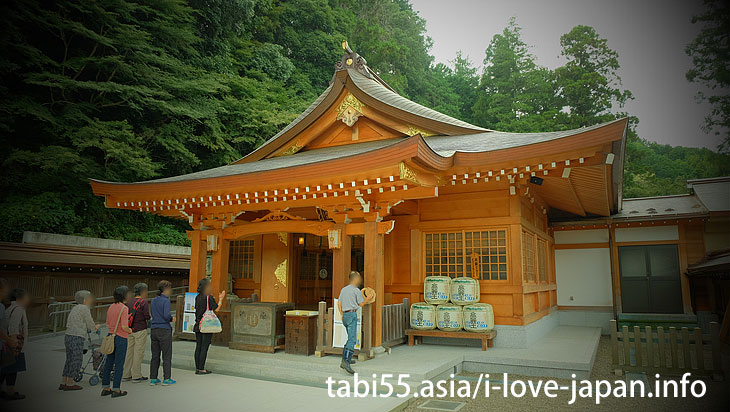 I thought of the Korai-people who buried the bones in a foreign land. 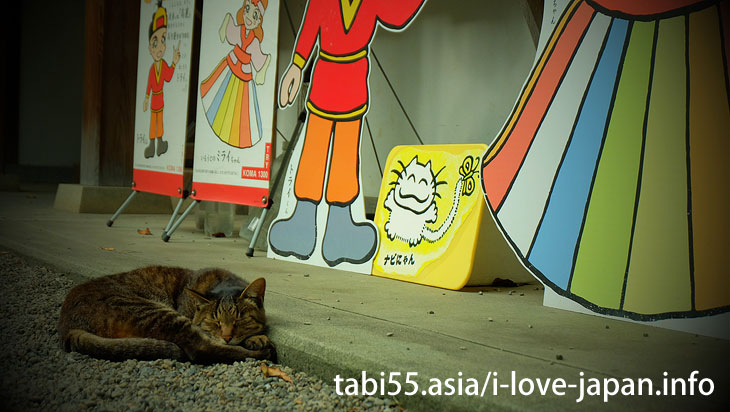 The cat was sleeping in front of the image character of Koma Jinjya Shrine.

If you have more than 3 hours at Narita Airport, such as when transferring to another plane, I recommend visiting Narita...
Walking distance from the Tsukiji market! “Teppou-zu Inari shrine” with Fujiduka (Miniature Fuji)Tokyo
Takeo Shinto shrine+huge camphor tree “Ohkusu”(Takeo,Saga)