I went to Holy Land “Rokkatei Obihiro head office”.
It is a Holy Land for the sweet lovers.
There are many “Rokkatei” in Hokkaido.
But there are limited sweets that can only be eaten at several shops. 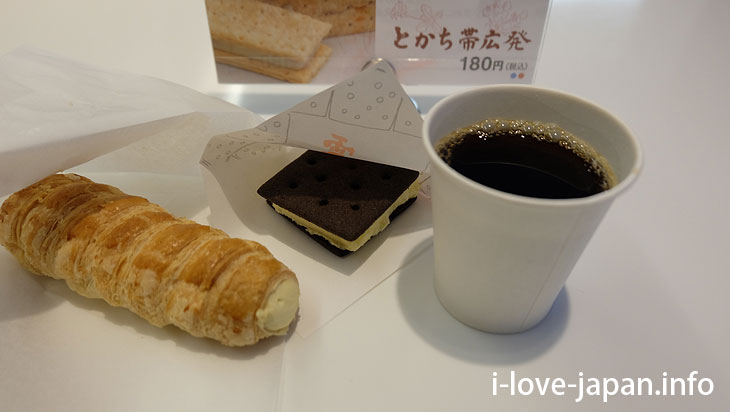 “Saku Saki Pie” is a dish containing cream in a corn-shaped pie.
As the name suggests, the pie is crisp(sakusaku)(￣￢￣) .

“Yuki-kon cheese(Sandwich of cocoa biscuit with cheese cake)”
A sour cheesecake is sandwiched on a bitter cocoa biscuit.
It’s 2 hours that you can eat deliciously… 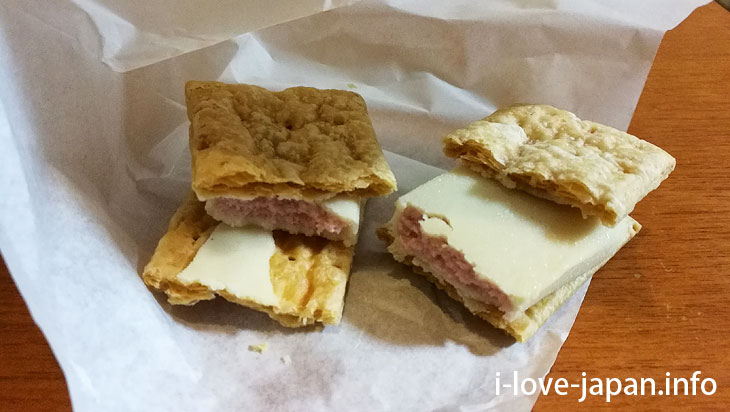 In addition, there is also “Tokachi Obihiro Hatu(departure)” as a limited sale item.
Raspberry cream (?) wrapped in white chocolate is in the pie cloth.
Each complemented the goodness of each.

I recommend eating sweets with short shelf life in eat-in space inside the store.
And let’s make a souvenir for long sweets period sweets as ‘Tokachi Sweet’. 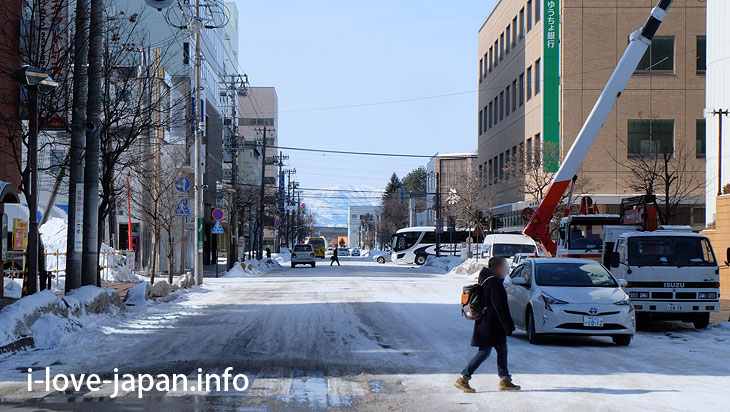 You can see the mountains of Tokachi behind the road.
↓ 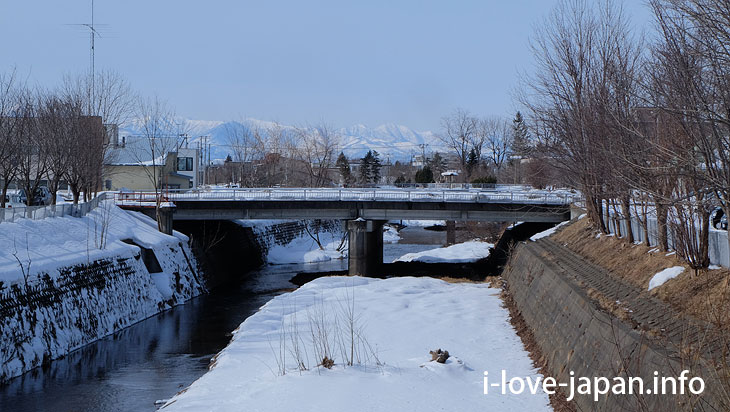 Obihiro river and the mountains.
↓
I found some swans near Obihiro Shrine. 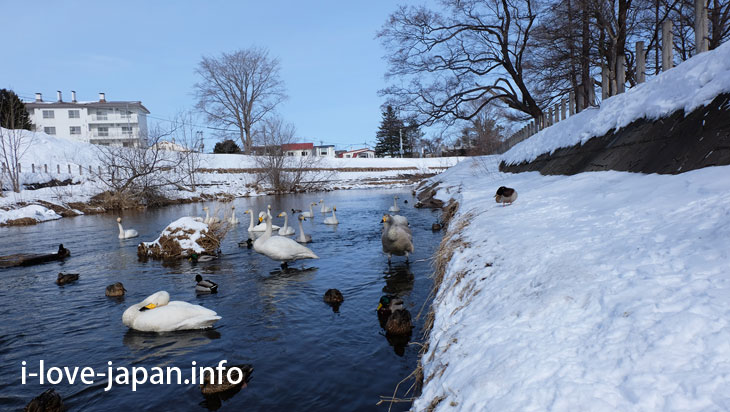 It is strange that there are swans in an ordinary residential area. 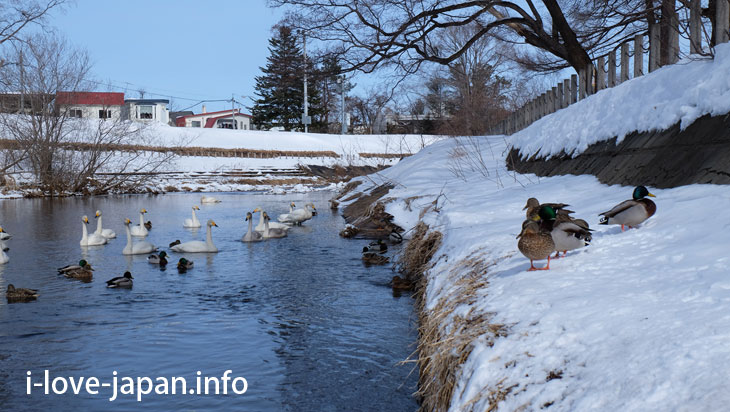 I do not know if swans are coming in the Obihiro river near Obihiro Shrine every year.
Hokkaido’s greatness is that there is “nature” in everyday life.
↓ 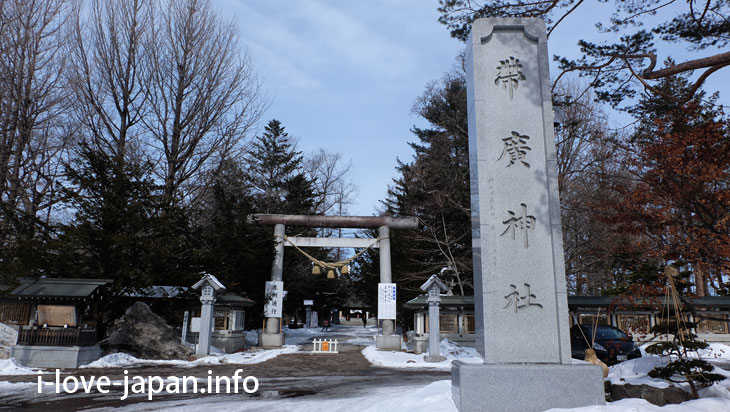 It was interesting, such as an amulet or an ema with the form of a horse

【12: 50】The second most delicious in Obihiro!?Pork Bowl of Fujimori 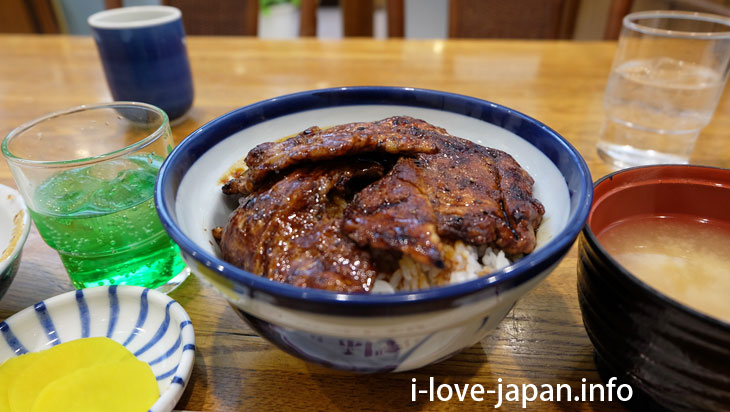 Come back to Obihiro station and have lunch.
Fujimori who feels like a “mass eatery”, I got the Obihiro specialty “Pork Bowl(Buta-don)”.
I was delighted the melon soda that came with the serviceヽ(￣▼￣*)ノ 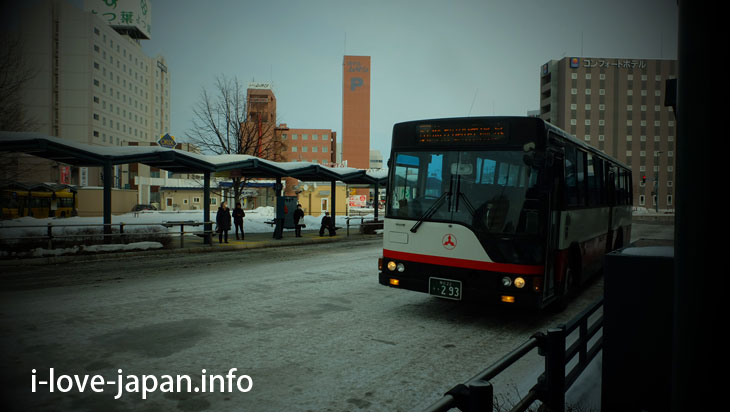 It was only “three and a half hours”, but I could walk around a lot.
I’m happy if I can help you.

Things to do & to see in Obihiro in winter【7H】Hokkaido
From Haneda Airport, I took JAL and left for Obihiro Airport. And I used public transport to visit Obihiro half a day f...

I'm going to buy a new computer, so I'm organizing old photos. This time, I will share a course that departs from Shari...

You can take a day trip from Obihiro station in Hokkaido to "Nukabira HOTSPA town". I participated in a tour that hiked...

In January 2018, I went sightseeing in Hakodate in 3nights 4days. ▼ Half day of the first day, summarized here Hakod...